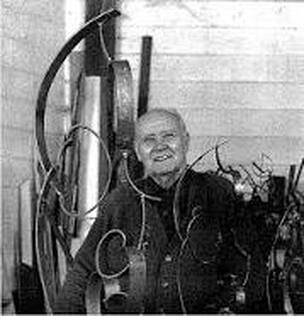 LENTON PARR b. 1924 — 2003
Sculptor Lenton Parr was born in 1924 and served in the Second World War with the RAAF from 1943 to 1951. He studied at RMIT between 1951 and 1954, and later in the United Kingdom between 1955 and 1957 where he was an assistant to sculptor Henry Moore.
Parr returned to Victoria in 1957 where he began the Centre 5 group, a collection of artists strongly influenced by British monumental sculpture. He held solo exhibitions in Sydney and Melbourne, and a retrospective exhibition of his work was held at the National Gallery of Victoria in 1984.
Parr taught throughout his life, at RMIT as the head of the sculpture school from 1964 to 1966, as head of the NGV art school from 1969 to 1972 and as director of the school of art at the Victorian College of the Arts from 1974 to 1984.
He was made a Member of the Order of Australia in 1977. His work is held by the National Gallery of Australia, Canberra; most state galleries, several regional and tertiary collections. A monograph of his work titled ‘Vital Presences’ was published in 1999.
Reference- Australian Galleries website